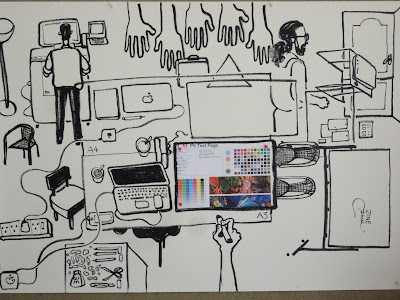 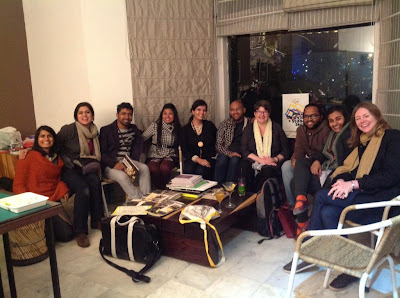 Every so often an opportunity comes along which encourages you to think differently about your worldview. In my case, this was an invitation from the organizers of the UnBox Festival 2013 (7-10 February, New Delhi, India) and the British Council to mentor a small invited group of designers, writers and illustrators based in India. Our task was simple: to produce a fanzine during the four-day Festival with a view that it should be off press in time for the participants to take a copy home with them at the end of the event.


Whilst this in and of itself was an intriguing proposition, what I wasn’t so keen to do was merely produce a publication which was a document of the event. Rather, there was a more fundamental question to ask: what might the fanzine format provide as an active space for making? And, in particular, in what ways might the fanzine format facilitate a deeper understanding of the Festival’s remit of exploring ‘action at the intersections’?

So, as we approached this task, we found ourselves asking what ‘Indian design’ might mean. The seven participants soon made me aware that India is a huge country and the diversity of its design perspectives meant that there was not one single identifiable approach or definition to ‘design’. This was reflected in the work, which suggested that diversity was a strength and not a problem. The fanzine became a focus through which our conversations took place. These ranged from the legacy of textile archives and the noticeable absence of a history of design in India to the increasing importance of the role of designers and social design practices.

In a series of accompanying ‘writing for design’ workshops, participants found their own voices, contributing personal perspectives on what it means to be a designer in India today.  Zine Press contains some of these writings. For example, Rohan Patankar, a final year architecture student from SPA, Delhi, reflected on the importance of scale in urban spaces in his piece on ‘Smallness’. Gauri Sanghi, an art and design practitioner, provides insights into the Festival’s notion of interdisciplinarity and the relationship between individual practice and its relevance to different contexts. Ali Maiorano, currently working in Bangalore, comments on the way in which ‘society is transitioning from the age of communication to a time of action’. She expressed her ideas visually, laser cutting the quote ‘I’m not a dream, I’m real’ into the cover of the UnBox Festival Handbook.

As each member of the team brought back to the Zine Press room photographs, illustrations and tales of overheard conversations gathered from around the Festival grounds, the zine became visually richer as new layers of the experience were added to its pages. Zine Press became more than a document of the Festival: it was a vehicle through which a shared, collaborative experience took place; both amongst the Zine Press team but also with the Festival’s workshop participants. Zine Press became one of many ‘actions at the intersections’ during the four days of UnBox, a way of ‘showing’ through making.  Our zine came off the printing press just in time to hand out copies to participants as the Festival came to a close.

The story continues to unfold here.

This blog looks at design and self-publishing; any amateur, independent and irregularly self-produced publications that cover a wide range of subjects and graphic approaches.